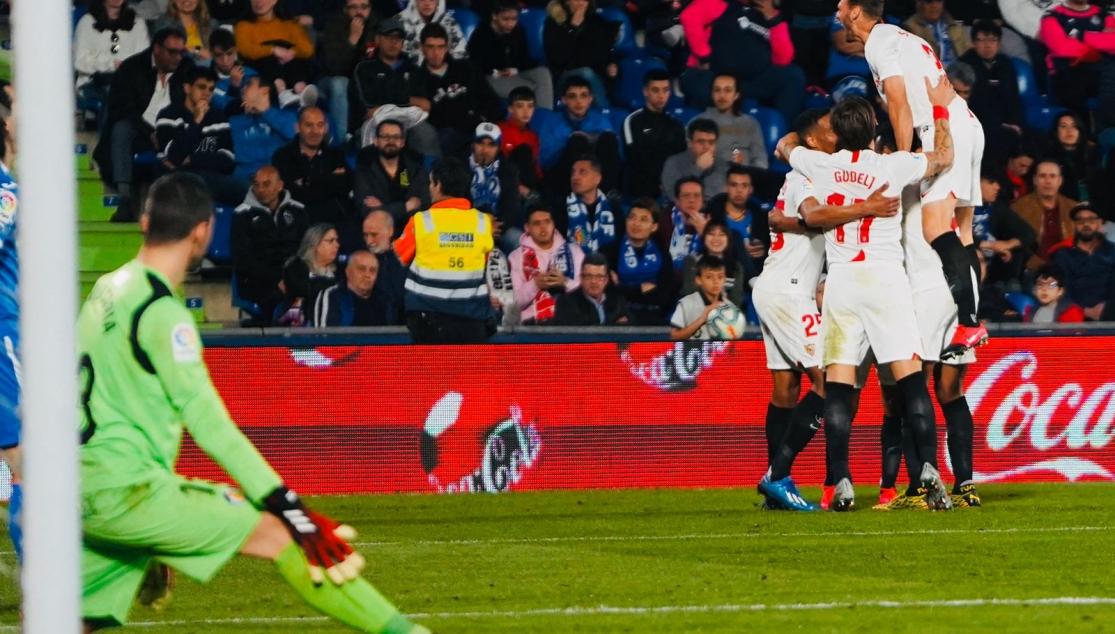 0-3: SEVILLA HAMMER GETAFE AT THE COLISEUM TO MOVE BACK INTO THE CHAMPIONS LEAGUE PLACES

A stunning performance from Lopetegui's men, when it seemed least likely, put an end to their winless run. Ocampos, Fernando and Koundé scored the goals

Sevilla FC have needed a game like this for a long time. They simply brushed aside Getafe with a stunning performance and won 3-0 at the Coliseum Alfonso Pérez, a ground which has traditionally been very unkind to Sevilla. But not today. Ocampos opened the scoring on the stroke of half time before Fernando and Koundé secured all three points in the second half, which saw Bono make his league debut for the club after Vaclík had to come off after the break.

Getafe started the game as they normally do, with high intensity and pressure as they tried to set the tempo of the encounter. However, it was Sevilla who started more brightly, and they had the only chances early on. Two long balls into the box, one from a free kick, caused havoc in the box. The first chance saw Fernando go clean through on goal only for David Soria to deny him, before Luuk de Jong fired over from a knock down. The Dark Blues began to balance the match and pushed up into Sevilla's half, but Vaclík was barely tested in the first half. The match did even up, with neither side having many chances, as Sevilla tried to fashion openings down the wings.

Ocampos scored the opener just before the break

The flow of the match was disrupted towards the end of the half, as Getafe players continued to commit fouls, obliging Estrada Fernández to book three of them in a very short spell. Reguilón had a run-in with Nyom which saw both players booked. The scoreline still remained goalless, but Sevilla took full advantage of an unforced error to take the lead at a vital moment, on the stroke of half time. Etebo slipped inside his own area, and Reguilón was alert to the error, quickly crossing the ball low for Lucas Ocampos who easily drilled the ball beyond David Soria at the far post. A half-time lead for Sevilla, and with a huge boost going into the second half.

After the break, Vaclík was unable to continue and did not take his place in goal in the second half, which brought about an unexpected league debut for Bono. Bordalás also made changes, bringing on Ángel for Deyverson. The match continued to be tense after the restart, something which forced the referee to blow for more fouls and hand out more cards, some of which seemed undeserving of such a punishment. Getafe continued to push forward, but Joan Jordán had the first real chance on the hour mark, deciding to shoot from a tight angle at a free kick, forcing David Soria into a good save.

It was at this point that Sevilla landed two huge blows on Getafe and killed the game off. The first one, a free kick from Suso which was flicked on by De Jong and bundled in by Fernando. The referee initially disallowed it for offside, but VAR overturned the linesman's decision, sparking wild scenes amongst the travelling contingent of Sevillistas, who did not stop making noise all game. Lopetegui made a defensive change straight away, bringing on Sergi Gómez for Suso, as to have three centre halves. The precaution did not stop Sevilla's good spell, as Koundé found himself free inside the area and beat Soria with a low drive. An unassailable three-goal lead, and Sevilla were flying.

Getafe began to slow down at this point, something that was maybe expected after their huge efforts against Ajax on Thursday night. They had a spell of corner kicks late on, but were unable to trouble Bono. Full time, and a huge away win for Sevilla to end their five-game winless spell. Both sides now face another European encounter in midweek, but with different feelings. Sevilla are back in the top 4, the Champions League places, and will look to secure passage to the last 16 of the UEL against Cluj in Nervión. The Blanquirrojos already have an away goal to their name and will look to take full advantage.