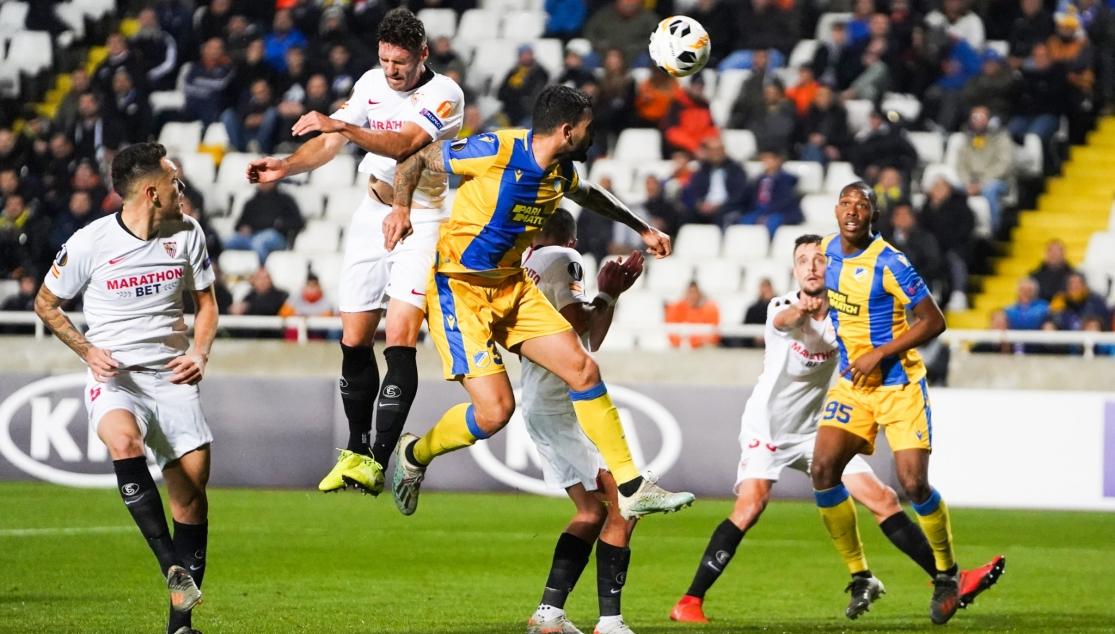 1-0: SEVILLA FC FALL TO DEFEAT AWAY TO APOEL

Sevilla FC fell to defeat in Nicosia in a match where not a whole lot happened in the first half, but in which both teams could have taken the lead. In the second half, the outcome of the encounter changed within a minute, where Sevilla should have taken the lead, but Dabbur missed his penalty; and then Savic gave the hosts their goal. In this way, APOEL FC have stopped Sevilla from completing their group stage with a 100% record.

There wasn't much happening in the first twenty minutes of the game, as no team had much to shout about, even if Sevilla were dominating the ball. It was then, in the 27th minute, that the game came to life. Bryan lost the ball in the midfield, and the opposition player forced Bono into a good save to keep the game scoreless. Straight afterwards, Rony Lopes played Escudero through who then squared the ball to Ocampos to tap home. However, the linesman adjudged Ocampos to be in an offside position and, at this moment in time in the UEFA Europa League, there is no VAR.

The second half started with changes as Julen Lopetegui introduced Dabbur and Óliver for Chicharito and Jordán. Moreover, this meant that there was more intensity in the play; and Gudelj, Rony Lopes and Escudero were all booked practically at the same time for stopping the counter-attack. Sevilla were on top and after a rebound in the area, Ocampos fell under the challenge of Alef and the referee awarded a penalty. In the following action, Dabbur's penalty was saved by Belec, who avoided the possibility of Sevilla taking the lead.

And, from the subsequent missed penalty, APOEL went up the other end of the pitch and won a corner. From the resulting corner, Matic whipped the ball in and Savic headed it passed Bono to open the scoring. Sevilla were looking for a reaction but Ocampos and Rony Lopes both missed good opportunities. Furthermore, the referee was continuing to show yellow cards throughout the game.

With Sevilla looking to level the score, APOEL looked to take advantage as they robbed Sevilla of the ball and Bono, twice, saved attempts that were destined for the back of the net. Lopetegui's men tried until the final whistle, with Óliver's shot and Mena's header both coming close. Despite this, Sevilla finished off the group stage with a defeat, and will find out their Round of 32 opponent on Monday.