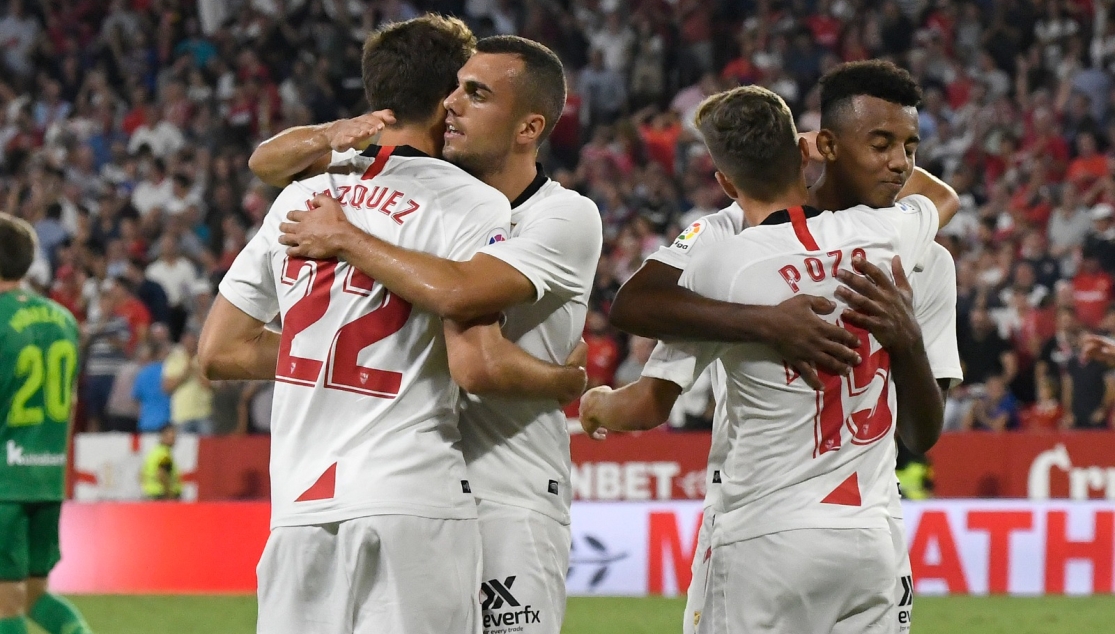 As everyone knows, football is football. After letting the three points get away from them in Eibar on Thursday night, Sevilla FC returned to the Sánchez-Pizjuán looking for their first win at home this season. After Oyarzábal opened the scoring with the game barely started, there wasn't a huge amount of optimism around the stadium. However, a display filled with football, energy and the right effort meant that Sevilla ran out 3-2 winners in the end and took the points total to 13 for the season so far.

The game couldn't have started any worse for Sevilla as after just a few minutes played, Reguilón was robbed of the ball by Januzaj, who played a superb through-ball for Oyarzábal, who made no mistake with his finish as he coolly slipped it past Vaclík. Sevilla had to press the restart button just minutes into the game, and start all over again.

Oyarzábal's early goal didn't dent Sevilla's spirits, who bounced back and equalised after a quarter of an hour

The early goal, instead of frustrating Lopetegui's men or making them lose their nerve of the pitch, revitalised them and Sevilla started to unleash their attacking football on both wings and to dominate possession in the midfield. Despite chances falling to Ocampos and Nolito on their respective flanks, they weren't able to put Moyá under a huge amount of pressure in the opening stages.

However, just after the 15 minute mark, Banega floated a brilliant pass into Nolito, who finished it with aplomb. He struck his volley sweetly into the bottom corner out of the reach of Moyá, giving Sevilla the equaliser they deserved. Sevilla were level, and continued to impose their game on to Sociedad on the surface at the Sánchez-Pizjuán.

Up until half-time, Sevilla continued to put pressure on Sociedad's goal, with chances aplenty. Ocampos forced Moyá into making a good save after creating the opportunity with some excellent play down the right hand side, whilst Koundé nearly scored with an acrobatic effort which resulted from a corner.

A great goal by Ocampos gave Sevilla the lead, who weren't finished there with the scoring

It was as if the referee didn't blow for half-time, as Sevilla started the second half with even more purpose than they had ended the first. With this impetus, they returned the favour to Sociedad by inflicting on them an early goal at the start of the half. Ocampos, showing his strength and persistence, didn't give Moyá a sniff with his rocket of a strike to give Sevilla their second goal.

Sevilla, now playing well, were dominating on the field and on the scoreline and they continued to play their football and didn't allow Real Sociedad, who couldn't get a hold of the game, a second on the ball. The scoreline could have been extended when the threatening Banega drove a shot across the area which was nearly turned in by Fernando.

With Vázquez's goal, Sevilla had a cushion which only lasted for a few minutes

Real Sociedad did not have the final say in a game where Sevilla were looking for a two goal cushion. Before a rasping shot by Jordán, which hit the woodwork, Isak found himself one-on-one with Vaclík but could only put it wide. Moments later, Willian José nearly robbed our Czech goalkeeper of the ball, which shook the defensive stability of Sevilla for a while.

And then, finally, it came. Pozo, who was making his debut at the Sánchez-Pizjuán, and who had shown much promise since coming on to the pitch, penetrated the backline of the opponent and put the ball across the area. After a deflection, Vázquez was on hand to send the Sevilla fans wild with a cool finish from a few yards out.

Portu brought Sociedad back into the game, but Sevilla held on for the win

However, just as Sevilla must have thought that the game was won, Portu was played through and placed his shot across the goal, out of the reach of Vaclík, to make it 3-2. Thankfully, Thursday night's match against Eibar was not to be repeated. Sevilla held out well in the closing stages of the match and secured an important victory, after losing their previous two matches against Real Madrid and Eibar.

Sevilla are back in action this Thursday night, at home against Apoel with kick off at 21.00, in the second matchday of the UEFA Europa League.