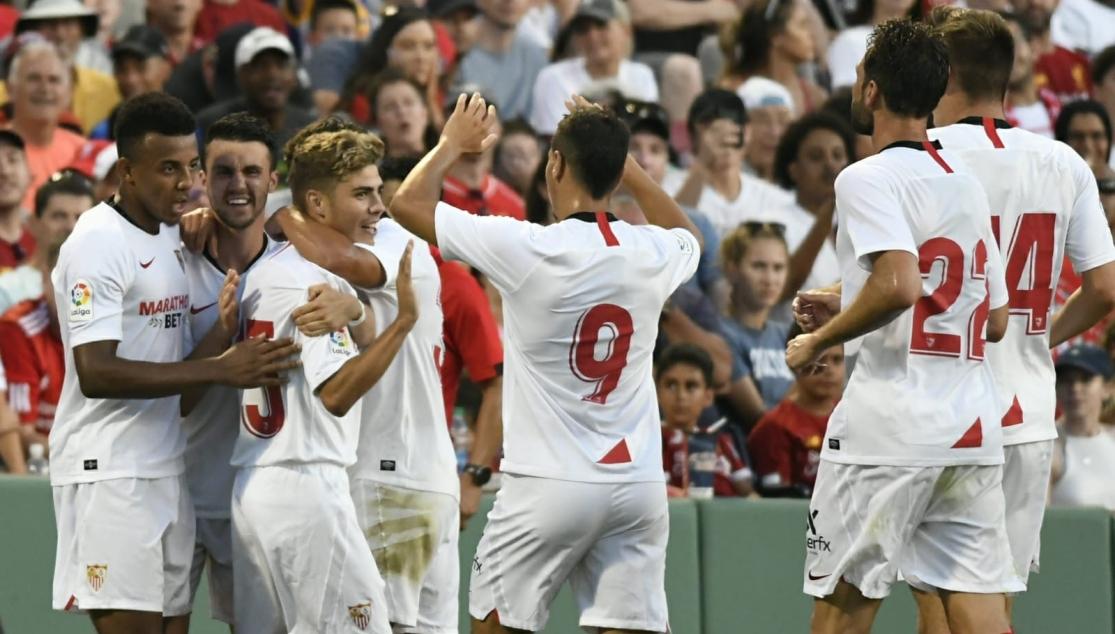 1-2: POZO SECURES WINNING END TO THE SEVILLA FC US TOUR

Fenway Park was the impressive setting to close Sevilla FC's North American tour in the early hours of this Monday, where Lopetegui's team faced the interesting challenge of European Champions Liverpool FC. And though the 'Reds' would start the better of the two sides, goals from Nolito and Alejandro Pozo would be enough to maintain the Nervionenses' winning streak in preseason.

Despite a bright start from Jurgen Klopp's team, Sevilla would slowly grow in confidence at Fenway, using both wings to begin to take effect. Navas would start to link up perfectly with Ocampos on the right, while Reguilón did the same with Nolito on the left. It would be precisely from the left-hand side that the game's first true chance emerged. A well-weighted cross from the inside forward would just float too high for Luuk de Jong, who had worked well to evade Liverpool's centre-back pairing. Nolito would be at it once again minutes later, this time forcing a save out of Longergan.

Sevilla were hitting their swing, closing the lines well when out of possession and pressing high to keep Klopp's men on their toes. Nolito, for all his hard work, would eventually be rewarded - finishing brilliantly after a Jesús Navas assist. Nolito takes his preseason goal-tally to three, having now scored in every Sevilla friendly. The Nervionenses wouldn't have the lead for too long - Origi pouncing to equalise after a corner from Trent Alexander-Arnold was nodded down in the penalty area.

Julen Lopetegui would reshuffle in the second-half, leaving only Ocampos and Jordán with Vaclik in goal; Corchia, Koundé, Kjaer and Escudero, in defence; Franco Vázquez and Óliver in midfield; Munir on the left and Dabbur as a lone striker up-front. Even Ocampos and Jordán would be replaced soon enough, with Gnagnon and Ben Yedder coming on 60 minutes in. The former would not be on the pitch for long, receiving a straight red card after a very poor tackle on Yasser Larouci.

Pozo would find Sevilla's winner minutes before the final-whistle

A little more than ten minutes were left until the end of a match that in its second-half lacked rhythm or momentum for either side. Sevilla's standout danger would be the combination of Munir and Alex Pozo, who much like Nolito is leaving his mark on preseason. It would eventually be the academy youngster who would find the difference-maker just before the final whistle. A Sevilla breakaway launched by a perfect Koundé throw would leave Pozo one-on-one with Mignolet; the forward would round the keeper with impressive composure to slide the ball into the empty net.

Sevilla FC closes off its North American tour with a third victory of preseason. Lopetegui's men will now look to extend the run in the final camp of the tour - when travelling to Germany later this week.