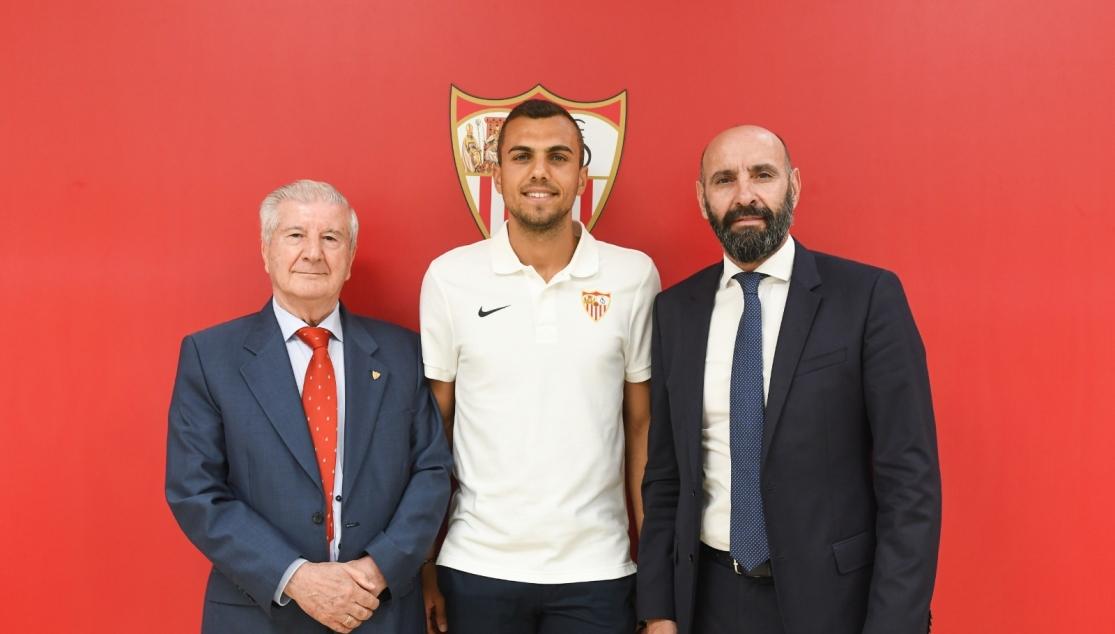 JOAN JORDÁN: "I'M WHERE I WANT TO BE"

"If you'd told me this two, three, ten or fifteen years ago I wouldn't have believed you", said the new signing

Joan Jordán, who will be a Sevilla FC player for the next four seasons starting July 1, completed his first interview as a blanquirrojo with official Club media. The midfielder was extremely excited to start a new professional journey, stating Sevilla was always his first choice, and emphasising his eagerness to experience the Sevilla faithful and Sevilla anthem as a Sevillista.

"I'm very happy, very excited, really looking forward to getting started. I want to thank the Club for the investment that it's made, like I always say. I'm where they want me and where I want to be".

Speaking on a personal note, he was clear: "I've grown a lot in the last two years, above all this year I've been doing well in all aspects. I come in as an excited kid, I won't be lacking for excitement. I'm going to give everything. I'm really excited about the project because I think both me and the Club are going to have a great year - though it will be tough, like all of them. I'm really excited to get started".

"A few years ago I would have thought this was impossible. I come to an incredible Club and city"

"If they had told me two, three, ten or fifteen years ago this would happen I wouldn't have believed it. After a lot of work I've been able to sign for Sevilla and looking back on it, it would have seemed impossible to me. It's a huge city, club, fanbase - all important things to me. I'm really happy, really excited and looking forward to the future".

Jordán also confirmed Sevilla was his first choice out of a number of interesting options: "I had other options, some abroad with quite a bit more money, but I've always said I value a lot of things and not just money. From the very first call from Sevilla to my agents we took it very seriously. It was an option I liked a lot and when steps were being taken I said I wanted to come here. And here I am. I want to thank Eibar for everything they've given me, I spoke with them and they knew I wanted to come here, and that we all had to make an effort. I was clear: I was going to Sevilla or I was going to Sevilla".

"I know where I'm coming to and the aspirations the Club has. We're both very hungry"

"Both the stadium and fans are something else. You can see that from outside. Last year we were 0-2 up on 88 minutes, they scored 2 in the last 5 minutes and they could have scored 5. That was totally down to the fans because with them we had one player less, and the fans lifted the team. It's impressive. I've played here with several teams as an opponent and I want to experience the stadium and the fans as a local. It must be incomparable", he said.

On the new challenge of playing in the UEFA Europa League, where Sevilla are kings with five trophies won, Jordán said, "Europa is a motivation. It's a dream as well to play in European competitions. I know where I'm coming to and the aspirations of the Club. We're both very hungry on that front. We have to fight for everything in every competition we play".

"I've already known the anthem for years. It gave me goosebumps when I played here with Espanyol"

Finally, the new signing made it clear: "I'm the sort of person who takes everything with motivation, excitement and enthusiasm. This is a huge Club with a huge fanbase. So what better motivation than to come to Sevilla to play in the Ramón Sánchez-Pizjuán in front of fans I already feel a connection with. I think I've known the anthem for a few years now. It's one of the best in Spain. When I came here with Espanyol and I heard the people singing I got goosebumps and experiencing that as part of the team has to be something else".