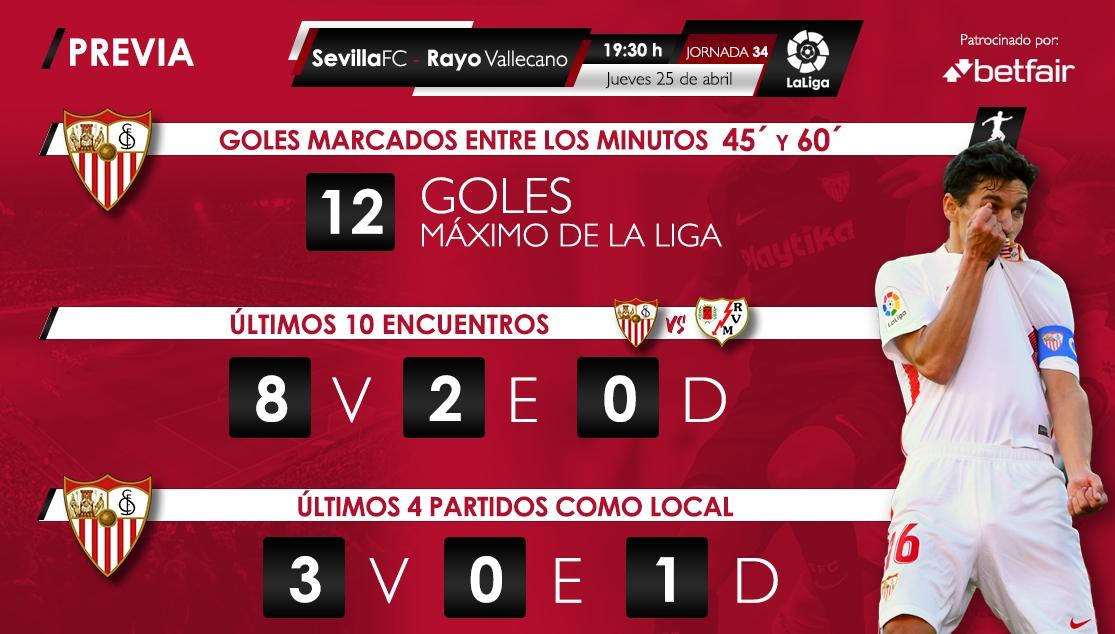 TIME TO RETURN TO WINNING WAYS AGAINST RAYO

The calendar has pit Sevilla FC against the team they opened the season, Rayo Vallecano, with five games left to play. That spectacular 4-1 to begin the season is a long time ago and there is no longer a margen for error for either team. Caparrós' team can't fail if they are to keep the fight for fourth place alive while the Madrid side are fighting for survival.

Joaquín Caparrós can welcome Jesús Navas back to the squad after recovering from his knee injury. Pablo Sarabia and Carriço  are back too after serving their suspensions. Gonalons and André Silva will not return in time although they are getting ever closer to getting back on the pitch. The team will be returning home, with the derby win seeming a long time ago after the painful defeat in Getafe. However, a difficult day for the rivals for fourth place has kept the fight alive.

Valencia's defeat in the Wanda keeps Sevilla's hopes alive and would allow the Nervionenses to overtake Marcelino's men should they pick up points agains Rayo. Furthermore, Getafe have a clash at the Bernabéu awaiting them and a defeat there would allow Sevilla to overtake them should they secure the three points - the same situation as what happened after the derby but with an extra two matches down. In good news for the Hispalenses, Sevilla's clashes against Rayo have a clear winner with eight wins for Sevilla and only two draws for Rayo.

Jémez will not be able to count on his star striker, with Raúl de Tomás missing out through suspension. Álvaro Medrán suffers the same fate, although he has travelled with the team should their appeal be successful. Imbula misses out through injury and Trejo and Advíncula have not travelled with Rayo. Ex-Sevillista Gael Kakuta and Javi Guerra are new additions to the squad having been absent for the past three weeks. Rayo have only picked up five of the last 30 points, leading to them occupying the bottom spot in the league.

Guillermo Cuadra Fernández will be in charge of refereeing the match and will be assisted by Carlos de Cerro Grande in VAR. Newly promoted this season, Cuadra Fernández has refereed three Sevilla games this season with three wins for the side. Two away from home - the 6-2 against Levante and the 1-0 against Espanyol - and one at home - the 2-0 win over Girona.