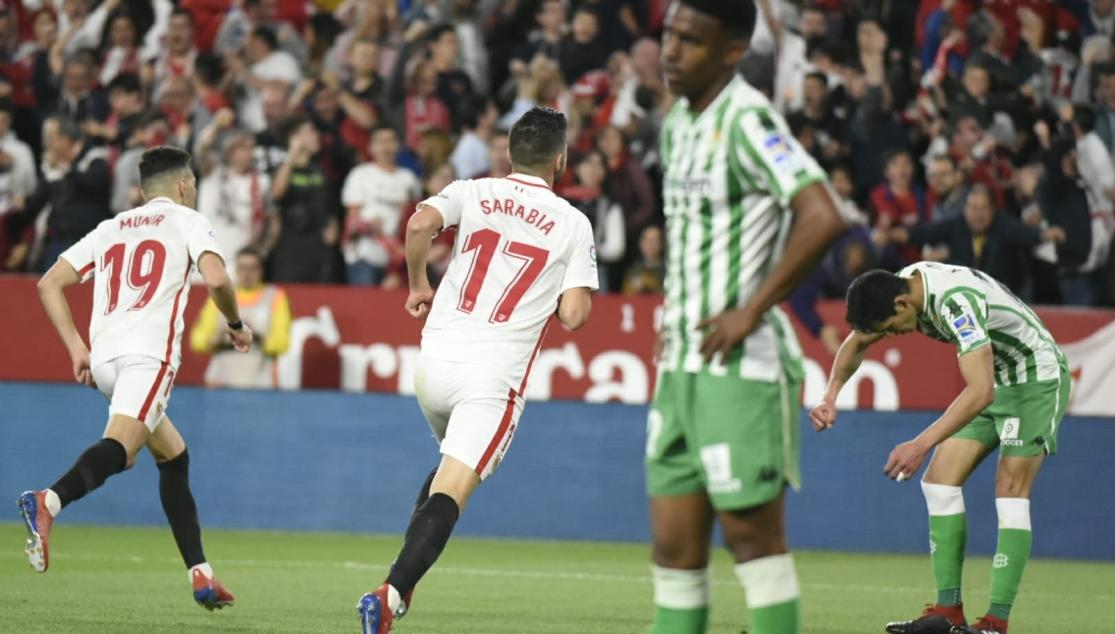 3-2: BACK TO WINNING WAYS IN THE DERBY

95 nerve-wracking minutes end in a win in El Gran Derbi after a negative run in Nervión that had been going on for too long. Goals from Munir, Sarabia and Franco Vázquez keep the fight for fourth place very alive.

We had to win this one. Three derbies without a win was too much for Sevillistas and the team did not let them down tonight. Sevilla FC win three vital points against a Real Betis who were in the game until the very end, although their possession football was no match for Sevilla's intense high pressing. Munir opened the scoring to put Sevilla in front, but the real action was to happen in the second half. Lo Celso levelled things up although Sarabia did not take long to put Sevilla back in front, before a world-class goal from Vázquez opened up a gap in the scoreboard. Tello's goal from a free-kick gave a nervy end to the game and Sevilla had to remain strong to gain the three points that push them into fourth place.

The game did not start as well as maybe Sevillistas had imagined. Gonalons' unexpected absence in midfield stilted Sevilla's gameplan and allowed Betis to control the midfield. A duel between Vaclík and Jesé was the first piece of action after a defensive error from Sevilla's defence. Navas first made a mistake with a back pass and then the goalkeeper did not clear right. Jesé ran away with the ball and, not noticing Canales who was alone, shot from distance and allowed Navas to make up for his initial mistake.

Betis' pressing prevented Sevilla from playing comfortably and Jesé had another chance, receiving a great pass from Guardado. Sevilla's game had reduced to rushed, long balls but their first big chance would be the first goal of the night. Vázquez won the ball on the wing in the 26th minute and played it into Banega in midfield. He switched the play out to Sarabia on the opposite wing who whipped it into the box. Munir came running in and beat Canales to the ball, heading it past Pau López in goal.

Sevilla were in front and this would change the outlook of the rest of the first half. Betis lost their control and Ben Yedder could have made it two after a wonderful pass from Franco Vázquez but López made a top save to deny the French striker. Sevilla would not let Betis out of their half and pressed them intensely. It was a half of two halves - an initial stage of Betis dominance without really worrying Vaclík and then a second stage, beginning with the goal, where Sevilla began to take control.

Despite the two-goal advantage, Sevilla had to fight until the end. The end of the five minutes of injury time was met with pure joy

After a shaky start to the second-half for Betis, they got back into it. A mistake from Roque Mesa allowed Lo Celso to pick up the ball and force Vaclík into making a good save. Jesé then wasted a one-on-one, Vaclík again coming out on top. Betis would get their goal however, thanks to a strike from Lo Celso ten minutes into the second half. Fortunately, Betis' joy would not last long as Sevilla would put themselves back in front four minutes later. Munir won the ball, played it into Ben Yedder who crossed it into Sarabia who expertly slotted it into the net. And then, in the 64th minute, Franco Vázquez scored a true world-class goal from outside the box, firing the ball past López.

There were 25 minutes to go and Betis went for it with everything to cut the deficit. Joaquín and Tello came on and Caparrós responded with bringing on Promes and Aleix, before an injury to Banega forced Rog to replace him. A foul on the edge of the box brought about Betis' second goal, making it 3-2 with eight minutes plus injury time to go. Sevilla had to remain strong and the game was brought to an end after two consecutive corners from Betis, with Pau López joining the rest of the team in the box. The win means Getafe will have to win tomorrow to regain fourth place and pushes Sevilla away from other rivals below them.