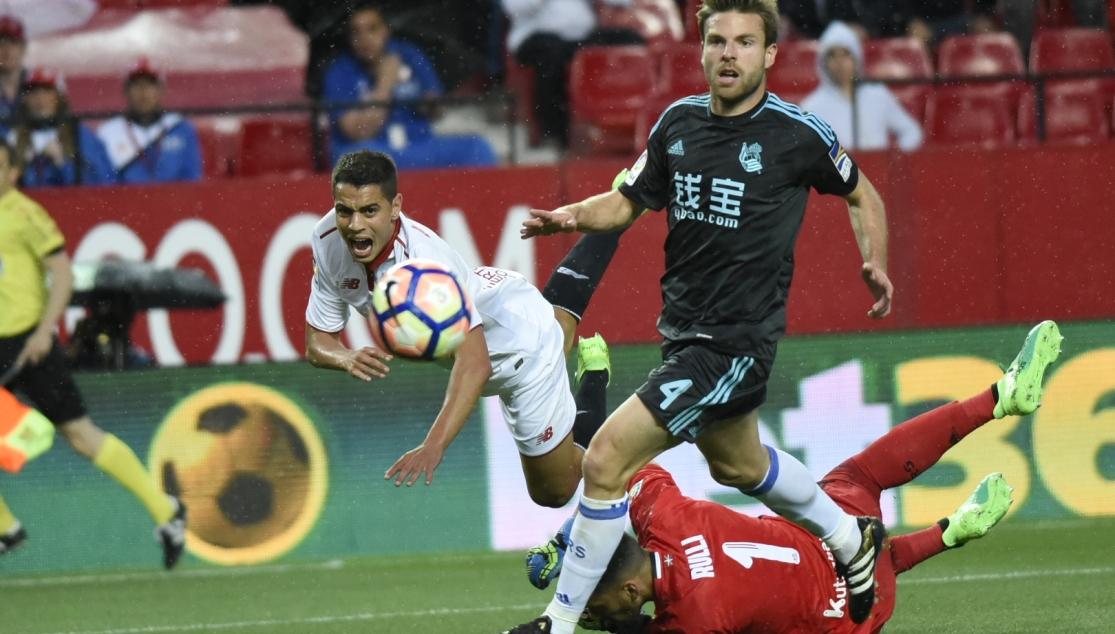 Sevilla FC vs Real Sociedad this Friday brings a number of challenges for Joaquín Caparrós' side. First thing's first, find a win after a run of nine without three points; next, rebuild the confidence and group character that has seen Sevilla through so many tough asks; finally, put some distance between a direct rival that has gone from strength to strength at the end of the season

Having hung at other magnificent footballing heights this season - a historic Champions League campaign and a fantastic run in the Copa del Rey - a returning Joaquín Caparrós now faces the challenge of breathing new life into Sevilla FC in La Liga, reviving famous qualities that sit dormant in the Club's DNA waiting to propel the side to Europe. Sevilla FC vs Real Sociedad will be his first opportunity to make an impact. With doubts, concerns and worries now counting for nothing, Sevillismo will demand nothing other than for souls to be left on the field and for every player involved to bleed the Club's 'we never surrender' philosophy. Four finals remain.

The crucial league fixture this Friday night against a revitalised Imanol Alguacil side represents nothing other than a fresh start. This season, our opponents have shown they can bring their best when it matters and Sevilla will need to recover every available quality - whilst minimising every mistake - to deal with the danger. To do so, Sevilla will need to go back to basics, resetting the team mentality and rediscovering the characteristics that have been typical of years of success. They may be just four matches but there's a lot of drama still to unfold. Nothing is ruled out yet. The only certainty is that beating our Basque opponents tonight is a must.

Real Sociedad, now under the management of Imanol Alguacil following a change of coach (Eusebio), are ending their La Liga campaign on a high, despite suffering a few slips along the way, such as that seen at their visit to La Rosaleda, losing 2-0 against the now relegated Málaga side. They are a high scoring team (63), however, they have scored just 19 goals away from home soil, and in six away games haven't been able to find the back of the net. Under the management of Alguacil, they have lost just one home game, equating to four victories and one draw in six matches.

An opponent that packs a punch: between 4 players 40 goals have been scored: despite only 19 being scored away from home and 55 goals conceded

Though only two other teams have outscored them in La Liga, they've also conceded their fair share (55); one more than Sevilla (54). The side find the goal with ease, boasting 9 players to have scored. Their four biggest threats are  Willians José (14), Oyarzabal (11), Juanmi (8) and Illarramendi (7); 40 goals between the four. Willians José and Oyarzabal also boast an impressive 8 assists between the duo (3 and 5). Between Xabi Prieto, Canales, el belga Januzaj, Elustondo and Llorente, 15 goals have been bagged, 3 each. But there are cracks in this seemingly solid front with the side having conceded almost just as many goals at home (27) as away (28). The team come off the back of a derby win against Athletic Club (3-1).

The Basque side sit just two points behind Sevilla (48-46); making a win vital for the Sevillistas to secure a five point lead

Of the two sides' last 6 encounters in La Liga, there have been 4 wins for the Basque side and one draw, not forgetting Sevilla's 0-4 victory at the Anoeta Stadium just over a year ago with three goals from Ben Yedder and one from Sarabia. Referring to the more recent league matches in Nervión, Sevilla have seen 4 wins with Real Sociedad bagging just 2. The opponents have drawn twice, the most recent ending with a 1-1 scoreline in May 2017 with goals from Sarabia and Carlos Vela. It should be highlighted that the Mexican striker - who bid his farewell last December at the Anoeta against Sevilla - scored a 90th minute goal, seeing his side to a 3-1 win. It was the player's only La Liga goal, and likewise the only goals from  Zubeldía (up until now) and Íñigo Martínez, who left the side three months ago to sign with Athletic Club.

This Friday, Sevillistas and Donostiarras come to heads with very contrasting runs. Of 21 points to have picked up in seven games, the hosts have just three compared to the Basques' thirteen. It's pushed the visitors to sit just two points back of Sevilla in the race for European football - a distance the Nervionenses will be eager to extend, looking upwards to 7th, 6th and 5th place. To do so, Joquín Caparros will need to reignite the Ramón Sánchez-Pizjuán and reclaim it as the fortress it has so often been. A lot riding on an exciting night of football in Seville.