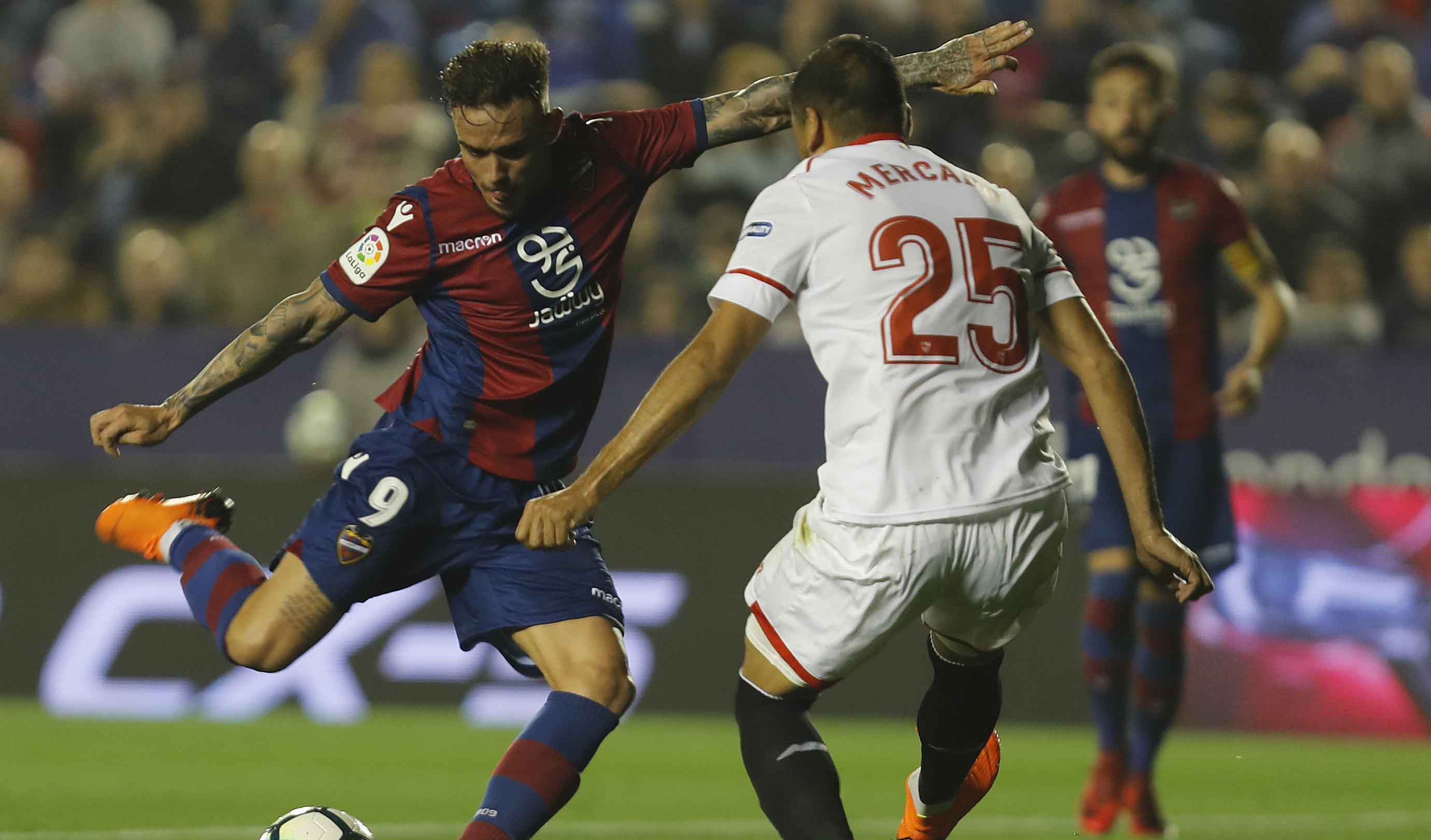 Entradilla
Sevilla could not lift their heads and time ran out. Another defeat for the Nervionenses in a match that saw Levante counter the visitors' dynamic almost diametrically. A Carlos Fernández wonder goal would not be enough to get something out of the side's trip to Valencia and Sevilla now slide out of the Euopean places with four matches to go
Cuerpo Superior

Achieving European football keeps getting more difficult. Sevilla FC fell to a painful defeat on their 35th matchday of the Liga Santader season in the Estadio Ciutat de Valencia. Levante guaranteed their own safety in the top-flight with a 2-1 win, with goals from Roger and Morales making Carlos Fernández wonder strike just a consolation. With four matches to play, a furious reaction is needed.

Despite Sevilla’s bright start – attacking promisingly down the left of a heavily waterlogged pitch in the very early going – any positive momentum built in the early minutes was snatched away from the Nervionenses with Levante’s first real attack of the game. Attacking down their right, an inside ball for Morales would see the forward find space in Sevilla’s box with support on his left. Sliding the ball through Sevilla legs to Roger, the Levante striker would break the deadlock with the hosts’ first shot of the game. Something of a sucker punch for the visitors, who naturally looked to respond quickly.

Going behind early through Levante's first attack of the game, Sevilla would respond through Fernández

And respond quickly is exactly what they’d do, equalising not five minutes later through a rocketed left-footed strike from homegrown youngster Carlos Fernández (starting ahead of Muriel and Ben Yedder as Sevilla’s sole striker). Found by Ever Banega with his back to goal but with not much room to work with, Fernández would work himself a yard to get a shot away. Unleashing a bullet of an effort, the keeper was left with no chance as the net bulged for a leveller.

Back on level terms, Sevilla looked to press on and find a turnaround before half-time. Escudero would threaten Levante’s net first with a sweet effort with the outside of his boot but would see the strike go wide. Nolito similarly would strike well when cutting inside from the left but would see his shot well smothered. Sevilla were pressing and went even closer twice more before half-time came. Heading centimetres wide from an Ever Banega corner with just under ten minutes of the first-half to play, Clément Lenglet would be the next to be frustrated; before Jesús Navas would have an opportunity right on the stroke of the half-time whistle to fire Sevilla ahead after a lovely team move. Unfortunately, he too would drag wide. A stalemate heading into the second-half but the visitors looking more likely.

Come the restart, the script seemed to switch dramatically, with Sevilla chances drying up and Levante pressing to regain their advantage. Carlos Fernández would first go close to a second goal of the game after a teasing Pablo Sarabia cross, then the Madrid-born winger would fashion his own back-heeled effort that just lacked the power to trouble the Levante goal.

But as both came up short, Levante would grow quickly in confidence and the visitors would soon be under the cosh. On 65 minutes, the hosts would have a clear-cut chance to go ahead. Breaking away from Mercado to find himself one on one with Soria, Morales would buckle under oncoming pressure from a recovering Lenglet and fire wide.  A close escape but Levante would soon threaten again – Soria this time called into action to take the ball off the feet of Levante’s onrushing striker. Two minutes later, Soria would be asked to repeat his heroics, saving spectacularly with a strong right hand to deny Levante a volleyed goal from the right.

The hosts had shown their danger, though, and would soon find the breakthrough to put themselves ahead once in the game once again. Having been slipped through behind the Nervionenses’ back-line, Morales would have another opportunity to find a third goal in the game. This time he would make no mistake, sliding the ball under David Soria with fifteen minutes to play. Sevilla would press for an equaliser but find a compact Levante defence, cutting out any threatening passes or crosses the visitors attempted. Muriel, Layún and Sandro would not be able to boost Sevilla from the bench and Sevilla had fallen a loss in Valencia.

Now without a win in La Liga since Athletic Bilbao visited the Sánchez-Pizjuán, a huge reaction will be needed from the Nervionenses. Four games remain in domestic competition – including a home clash with Real Madrid and a derby at Betis – and twelve points now has to be the unequivocal aim should Sevilla want European football next season. Real Sociedad are next up, three points are essential.