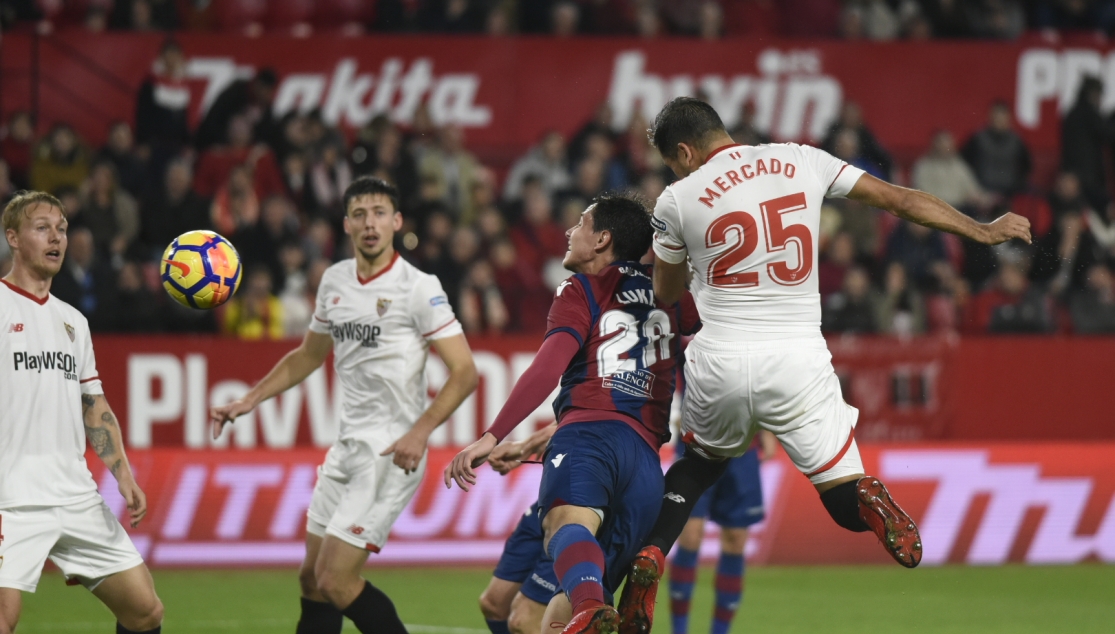 A bittersweet taste for the final home game of 2017, a year which Sevilla have completed undefeated at home but one that could not be rounded off with a win against Levante UD. There were chances for both sides but neither could break the stalemate

Despite good football, neither side could break the deadlock that saw Sevilla finish an 2017 at home but saw the Nervionenses unable to finish off their year in Nevión with three points. The heavy rain in the first minutes seemed to marr a game that saw neither side at their best, nor able to create clear opportunities for their attackers. With Eduardo Berizzo returning to the Sevilla FC dugout, the home side came out looking for the win with more conviction than their opponents but a tight and intelligent Levante defense proved too difficult to break down.

It was far from a simple start. The downpour that fell on Nervión in the first minutes made the pitch quicker than normal, resulting in missteps and mistakes - ensuring nothing came easy for either side. A lack of control meant a lack of clear-cut opportunities. That was until quarter of an hour had passed, when Turkish striker Unal drew an unbelievable save from Sergio Rico, who managed to tip a point-blank strike over the bar.

Just before the break, both teams hit the woodwork

Berizzo's men didn't seem comfortable despite being able to avoid too many surprises at the back. In attack, Ben Yedder and Ganso were not able to link up as well as they would have liked and failed to find the spaces they needed to hurt their visitors. The two biggest chances of the first half would come from set-pieces. With just ten minutes left to play, a free-kick from Jason cannoned off both the post and the back of Sergio Rico and thankfully went behind for a corner. Not long after, a Sevilla corner was met by the head of Mercado; unluckily, his effort was tipped onto the post by Oier - who remained solid throughout the 90 minutes.

The fans didn't hesitate to make their opinions known come half-time. Above all, the Sevilla faithful demanded a more determined Sevilla in the second half. And though Jason was the first to try his luck, Sevilla entered into their most dominant period of the game come the restart. Attacks were still disjointed but with full-backs pushing on and Franco Vázquez giving the side more presence, Levante could not press as high up the pitch as they had done in the first-half. Navas came on to replace Gabriel Mercado and become Sevilla's all-time leader in club appearances - overtaking Pablo Blanco for his 416th match.

Throwing everything onto the pitch for the win, Berizzo replaced Correa with Muriel with ten minutes to go. Despite the rain, the Nervión stands pushed their side to fight for deadlock-breaking goal. Ben Yedder, Sarabia and Escudero came closest but Oier was equal to every effort and frustrated the home side with save after save. Four minutes of added time were not enough for the Nervionenses to find a goal.

Sevilla's last home match before Christmas, though a trip to the Anoeta is still on the cards next Wednesday at 21:30pm. There, Sevilla face Real Sociedad in a clash that will see the away side without Clement Lenglet - the first Sevilla player to miss a game through suspension this season. It will be Sevilla's last chance at three points in 2017 before competition returns in January after the winter break.