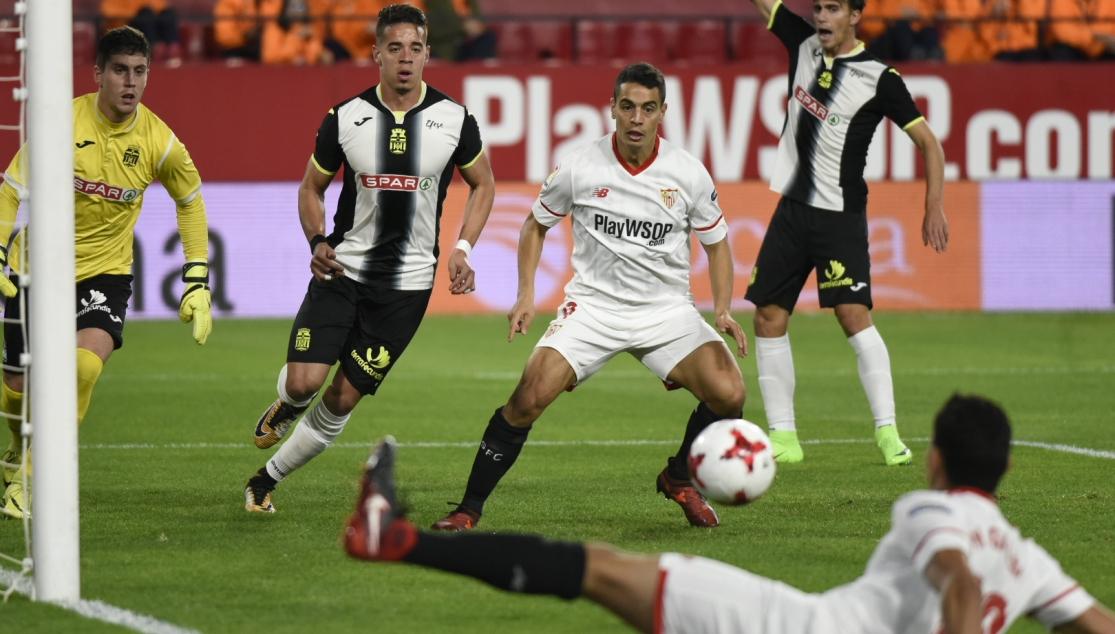 4-0: CONVINCINGLY THROUGH TO THE ROUND-OF-16

Nobody was expecting surprises and they didn't come in the return of the Copa del Rey to the Ramón Sánchez-Pizjuán. A brace from Ben Yedder, one from Ganso and one from Correa meant Eduardo Berizzo's side - this evening led by Ernesto Marcucci - won the tie 7-0 and found safe passage through to the round-of-16

Sevilla FC secured safe passage through to the round-of-16 of the Copa del Rey this Wednesday after a deserved and convincing victory in Nervión. The tie finished 7-0 on aggregate after a 0-3 away win and a 4-0 win this evening. In Ernesto Marcucci's first game at the helm of the First Team, the home side removed any doubt within five minutes of play after one of the quickest braces Wissam Ben Yedder will ever score. Ganso widened the lead to three before half-time and then Correa, who came on after the restart, finished off the scoring with a cooly-taken fourth.

Rotations were expected but there was no sign of a disjointed performance. Long before many fans had the chance to even get to their seats, two goals from Wissam Ben Yedder made the rest of the game a formality. His first was set up well by Borja Lasso; his second - a true poacher's effort - involved smooth team build-up from Nolito, Navas and Ganso. The Frenchman was hunting a hat-trick after five minutes.

Ben Yedder opened the scoring early, then Ganso made it three before the break

An incredible start to the first-half that would go on to be dominated by the home side. Though Los Nervionenses didn't bombard Cartagena's net, they looked clinical - looking to take practically every chance that presented itself. Cartagena looked seriously overrun in the centre of the park and it would be one of Sevilla's three central players that would find the third. PH Ganso, found by Nolito, would try his luck on the edge of the area. A wicked deflection would take the ball past Marcos and five minutes before the break, Sevilla had a three-goal lead.

Marcucci didn't wait to continue rotating and before the second-half had even started, Correa was brought on for Ben Yedder. The Argentine led the front-line and injected pace to Sevilla's attack. Though Cartagena would have their chances to grab consolation goals, David Soria was equal to any efforts. After seeing Mussa drag a one-on-one effort wide, the Sevilla keeper made an incredible double save to keep a clean-sheet. It was a missed opportunity Sevilla would soon punish, going on to find a fourth and final goal.

Brought on at half-time, Correa would find Sevilla's fourth

After winning the ball back high in the Cartagena half, Corchia would put it on a plate for Correa. With fine control and the skill to take it past a Cartagena defender, the former Sampdoria man slotted home with his left. With two final substitutions (Muriel and Banega coming on for Nolito and Krohn-Dehli respectively), the home side saw the game out well.

A comfortable way to secure passage to the round-of-16 of the Copa del Rey, which will see its two legs held on the 3rd and 10th of January. Sevilla will find out their opponent this Tuesday at 13:00pm. Before then, the side will need to focus on La Liga once again, with Deportivo La Coruña visiting the Sánchez-Pizjuán this Saturday at 18:30pm.