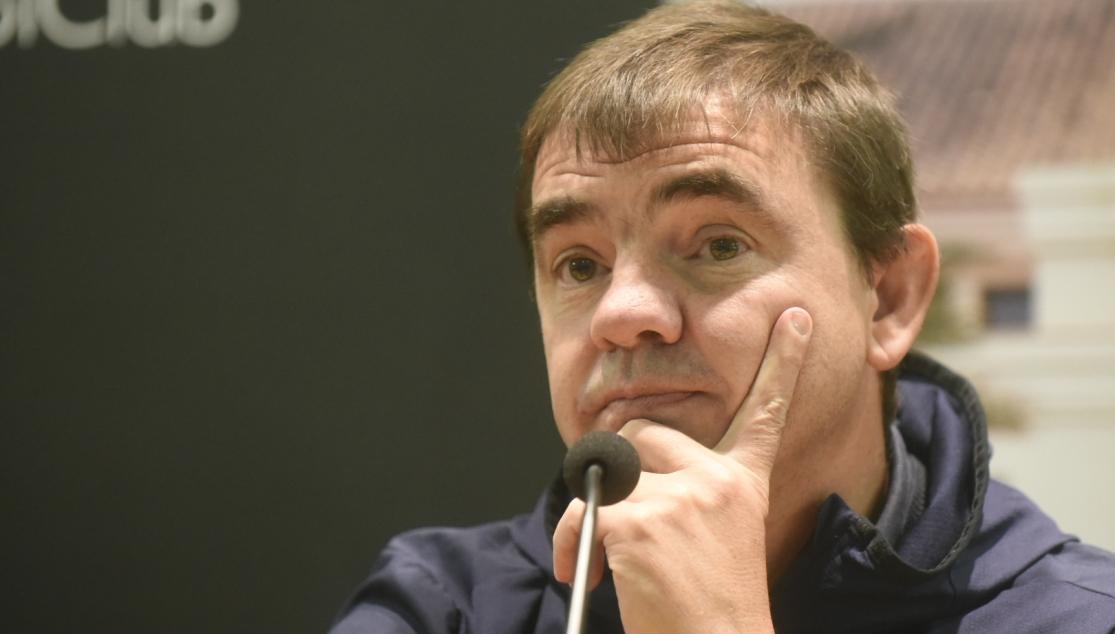 MARCUCCI: “BETWEEN US WE'RE GOING TO MAKE SURE SEVILLA KEEP WINNING”

The assistant coach, who is sitting in for Berizzo during his recovery period, will take the reigns for the first time against FC Cartagena in the Copa del Rey - where he doesn't want to see any surprises: "This isn't over, we need to compete"

Ernesto Marcucci, assistant coach of Sevilla FC and interim manager in the absence of Eduardo Berizzo - who will be subject to a period of recuperation following his operation this Tuesday - spoke to the press ahead of Wednesday's Copa del Rey clash with FC Cartagena.

He made three things clear in his pre-match press conference. Firstly, the strength and energy of Berizzo, who has remained in constant contact; secondly, his pride in taking the reigns of the Sevilla FC dugout (though in unfortunate and unexpected circumstances) and finally, the need to maintain winning ways in Wednesday's Copa del Rey second leg with FC Cartagena: "We have to give it our all and not struggle in this knock-out" he said.

First and foremost, Marcucci wanted to thank the club for its support: "which has been extremely valuable for us to continue with our job. Eduardo is in constant contact but circumstances mean that I'm here today and making decisions for the team. Eduardo will, of course, be involved on a daily basis, so we'll be treating things as normally as possible. It's a place where none of us wanted to be because of circumstances a friend is going through. After that, when it comes back to football we're going to try to manage it in the best possible way. We're a big club and the aim is to keep winning".

He continued on Berizzo, who he said amazed him with "his mental strength. It gives us energy. He left everything organised for today, we spoke before training and contact is constant. His strength is an example for everyone at his side. He prioritises his work over his health, he has already shown that. We'll try and keep his pace up. We're here at his disposal and the disposal of Sevilla so we can get through this as quickly as possible and keep winning".

It was professionalism that Marcucci said he saw reflected in the whole squad: "The players show mental strength day by day and especially today. They'll show it to everyone every day Eduardo is not at the helm". Whoever is, Marcucci branded it a challenge that was "unexpected on account of the circumstances. It's an honour to train Sevilla but the circumstances mean that if there was any place I wouldn't want to be, it would be in this position. I'm one colleague more at the side of a friend who is doing everything he can to get out of this as soon as possible and return to his rightful place, which happens to be this one".

Furthermore, he described himself as "a man obsessed with football, something that Eduardo has also instilled in me. Although not as intelligent or capable as Eduardo, I am just as obsessed and hardworking as him. We are predominantly similar, although there are some differences. But everything I've done in football, I've learnt from him and I will always go by what he says. This is not a substitution, it is work and we are teammates. Together we want Sevilla to carry on winning".

Already with sights set on the upcoming cup game against FC Cartagena, Ernesto Marcucci said the idea is "to be intense, to play a good game, instill in the players that it's not finished. This is the worst thing that could happen, to think that the match is over. We have to compete and make the most of every minute we have because a lot of difficult matches lie ahead. Everyone needs to be ready and give it their all so that we don't struggle". In light of this, the coach was asked about N'Zonzi and his absence from the squad: "It's a technical decision. He's one more player in the squad and when the time's right he'll come back".

"The idea is not to struggle as much, although it's better to have a reaction than not"

Finally, Ernesto Marcucci spoke about the team's recent comebacks: "We don't want to struggle as much, the idea is to be focused from the start, that there is nothing to alter the game and we go out for the win. However, it's better to have a reaction than not. We have to improve what we already do well, whilst correcting previous errors and working on the mindsets of players so that a comeback isn't necessary. That's what we are working towards and where we're focussing our attention".