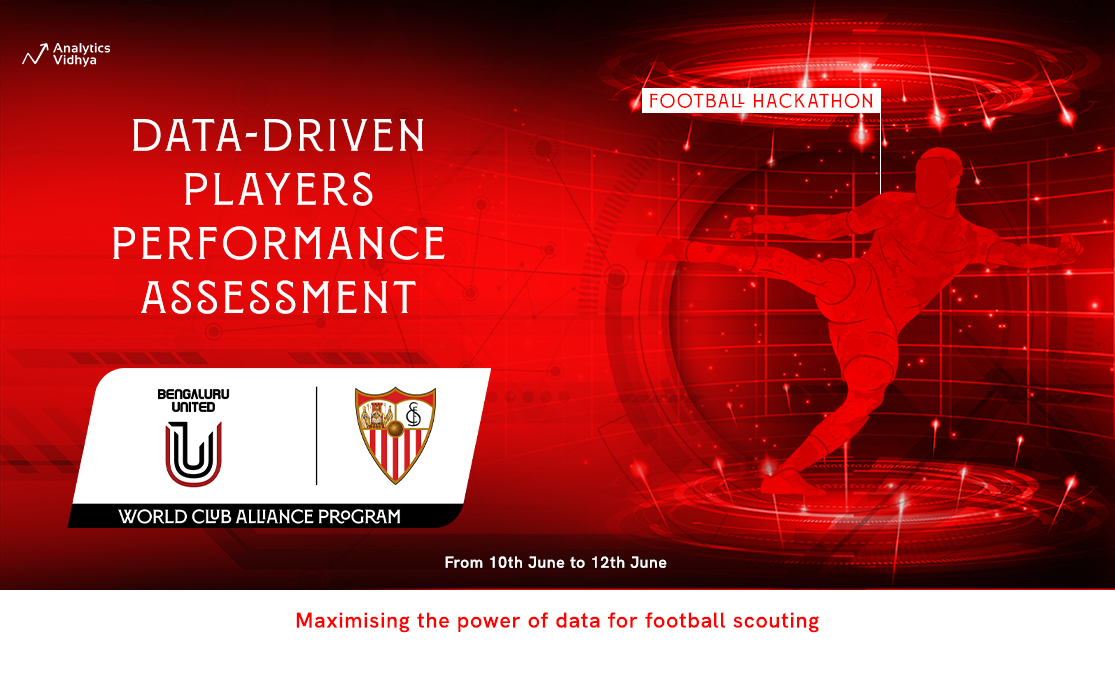 Bengaluru 25th May 2022: In a global first, two football clubs, FC Bengaluru United, one of India’s most exciting young football teams, and their international partner, Spanish footballing giant Sevilla FC, will be jointly launching a ‘Football Hackathon – Data Driven Players Performance Assessment’. This online Hackathon will be a unique opportunity to effectively use data science in the space of professional football scouting and player performance analysis.

Sevilla FC together with FC Bengaluru United will be giving participants access to one of the largest proprietary scouting datasets in the world - physical, contextual, kinematical, technical, and tactical oriented data related to the players, team, and their opponents. The goal of the hackathon is to leverage this data as a strategic asset to create an algorithm that will help break down, understand, and evaluate player performance with the ultimate goal of enhancing the quality of both the Sevilla FC and FC Bengaluru United squads. The three-day online-Hackathon will be launched on the 10th of June in Bengaluru by the leadership team of Sevilla FC and FC Bengaluru United.

“Data analytics play a key role in football today to offer game-oriented solutions and to give clubs a competitive edge” said Gaurav Manchanda, Owner, FC Bengaluru United. “One of the goals of our long-term partnership with Sevilla FC is to work on projects that address technological innovation and the Hackathon ties in perfectly with our overall vision. This is a first-of-its-kind football Hackathon and we are excited about the type of solutions that will be developed.”

“Sevilla FC has a strategic commitment towards the development and implementation of data-driven technologies across all operative areas of the club. As a result, the club, empowered by its Data Department, keeps itself involved in a wide spectrum of machine-learning intensive projects that aim to optimize the quality of our squad and to grow and fully engage our fan base”, said Dr. Elías Zamora (Chief Data Officer). In addition, Ramón Rodríguez “Monchi” (General Sports Director) remarked “The final goal is to keep being extraordinarily competitive within a footballing scenario of financial inequality by combining the increment in the pace of resource generation and their intelligent allocation.”

Monchi: “The final goal is to keep being extraordinarily competitive within a footballing scenario of financial inequality by combining the increment in the pace of resource generation and their intelligent allocation.”

In January 2021, FC Bengaluru United announced their partnership with La Liga giants Sevilla FC, a five-year agreement, which focuses on two key areas: the co-definition and co-development of technological projects in the football industry as well as increasing the Spanish football club’s footprint in one of the world’s most vibrant and rapidly growing football markets. Later in the year, FC Bengaluru United and Sevilla FC were awarded the Best Internationalisation Strategy by the prestigious World Football Summit (WFS) Awards becoming the first Indian Football Club to win this prestigious award.

The Hackathon will be hosted by Analytics Vidhya, the world’s leading data science-related platform and will offer all data enthusiasts the opportunity to win both attractive cash prizes and Sevilla FC merchandise. Please click the following link for registration: https://datahack.analyticsvidhya.com/contest/football-hackathon/